We left Glasgow at 6am to drive to get the train to France. The tunnel amazed me AGAIN by getting us there in 35 minutes, I wonder if it will ever not amaze me! We didn’t drive too far that night in France. We stayed over in Saint Omer, what we saw of the town was lovely; the sun was shining which always makes places look nice! We were all pretty tired after driving all day so we were very rock n roll – dinner then a DVD in bed! Our DVD of choice that night was “I Love You, man” It’s hard to choose films to take with us to please 2 girls who like a good chick flick, and Scott. I think I chose pretty well at 5 in the morning while I was half asleep and getting ready to leave!

Paris day! We had a 3 hour drive to get there and sound check wasn’t until 6pm – this gave us plenty of time as we were out of our hotel by 11am – why can’t all hotels be a 12pm check out!? Driving in Paris has always been a bit of a nightmare any time we’ve been there before, we’re usually staying on one side of the city and playing on another but today our hotel and venue were only 1km apart. We decided to check into the hotel before heading to the venue to lighten our load. The hotel had an underground car park, we had to park 5 floors down. Kirsty and I were at the car alone while Scott was still in the hotel, we were standing chatting outside the car when I heard some sort of animal padding along the concrete. I freaked out thinking it was going to be some sort of creature that lived underground because you just never know!! Turns out it was just a dog that seemed to live down there but all I could think of was the crazy dog in “I Am Legend” so I locked us in the car.

The venue was called Espace B, in the north east of the city. We were pretty early so we loaded our gear into the venue then had the afternoon to ourselves. We wandered around the corner to a nice little bar that I had spotted on Google maps when I was looking up the venue before we left. We just spent the afternoon sitting outside the bar, people watching and having a few drinks. I even drank beer – I’m not a beer drinker, I don’t like the taste at all but this one was a raspberry beer which was lovely! I suppose that’s sort of cheating but it was still called beer!

Headed back to the venue for 6pm but everything was running late as there had been some technical problems during the other bands sound checks, we were first on that night so were the last sound check. We were happy to line check then play but doors were pushed back by half an hour to give us some more time to check everything. The stage was a busy one that night, the headline band The Music Tapes had a cool set up but there was so much equipment on stage! We don’t take up that much room though so we managed to fit in comfortably. Our set was 45 minutes and I really enjoyed it, Paris gigs are always fun, we’ve never had a bad one! Our booker Pascal was there with his family, he is also the booker for The Music Tapes, it’s always nice to see him and his family when we’re in Paris. It’s nice to see familiar faces in foreign places.

Check out at this hotel was 12pm! Hallelujah!! We obviously had to go back into the terrifying dog car park, I’m not scared of dogs, I actually love dogs but this one looked a bit terrifying! Luckily we didn’t see the demon dog on the way out!

We were heading to Thiers in the South of France, the drive was stunning – the sun was splitting the sky all the way. We arrived in Thiers at around 6pm and it was still incredibly warm, we managed to find the tennis on French tv so decided to get some drinks in the hotel room and watch it, our hotel was just next to a supermarket so Kirsty and I got some beers and prosecco while Scott watched the start of the tennis. We didn’t last long watching it because our hotel room was so warm – it seemed like a waste to sit inside so we took our drinks outside and caught the last of the sun. We went out for dinner that night just across from the hotel, it was a 5km trek up a huge hill into the town that we knew we were spending the whole day in on Saturday so we didn’t go to the festival on Friday.

Once again the sun was splitting the sky, it was insanely warm all day but the festival had a great atmosphere. All the roads around the town were closed to traffic, there were 5 or 6 different stages dotted around the town, we were playing on the biggest one which didn’t open until 8.30pm. The other stages had bands on from 2.30pm. We arrived quite early so had some lunch in the artist catering area which was amazing, the view from there was unbelievable. There was so much choice for lunch, I took some pasta and what I thought was ham – WRONGGG – turns out it was tongue. I was not amused when I was told it was tongue. It didn’t actually taste that bad but it’s more the thought of eating a tongue that made me not finish it. This obviously led to a few puns from Scott. 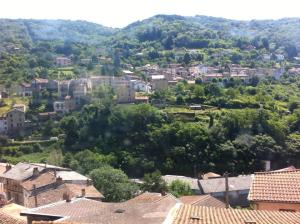 After lunch we wandered around to see what the rest of the festival was like, the town was very hilly so along with the heat and the hills it felt like walking around was giving us a good workout! The town looked amazing, they had flags hanging in all the lanes, it was so colourful. We came across a stall doing hair braids, Kirsty has wanted one for so long – every time we play a festival we have a look around to see if anyone is doing them but this was the first time we’ve found a stall so she decided to get one. She chose blue and green threads – I tried to watch the woman who was braiding the hair to see if I could work out how to do it if Kirst ever decides she wants another one but her hands were moving so fast I don’t have a clue where I would start! 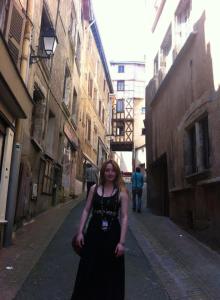 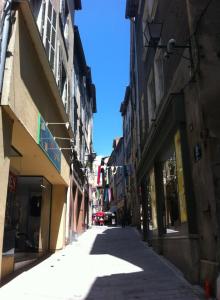 We had a sound check at 6pm so we headed down to the car to load our stuff to the stage. The walk from the car to the stage wasn’t that long but remember when I said the town was very hilly? And warm? It wasn’t too bad for me because I didn’t have nearly as much stuff to carry as Scott – no idea how he carried so much stuff in that heat. Our stage was directly in the sun at 6pm so we were melting during the sound check – I don’t think I’ve ever been that warm on a stage. Last summer we played an open air festival in Vienna and it was warm but I think Thiers topped that! I’m so glad we weren’t playing until 10pm! It’s nice to get a sound check at a festival because a lot of the time it’s just a quick line check then you play. All the techs were great and made everything really easy.  There was a great backstage area which was so nice and cool compared to the crazy heat outside – we headed straight there after almost melting on stage then it was time for some dinner. I was much more sensible with my food choices this time – they had salmon. My favourite fish, perfect!

Our stage time was 9.40pm but everything was running late so it was nearer 10pm when we actually played, it was one of my all-time favourite gigs! The atmosphere from the crowd was amazing. Our stage was just next to a church and during ‘poster children’ our light show was purple. The purple lights against the church looked so spooky and eerie along with the song. My side of the crowd were pretty rowdy and at the end of the set during ‘Moondogs’ they were moshing! Amazing. Definitely in the top 3 best Haight-Ashbury gigs! 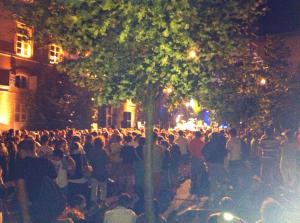 From there it was off to the crazy heat of Perpignan – heat which I am currently sitting in, melting, waiting to play our gig! Look at that sky! 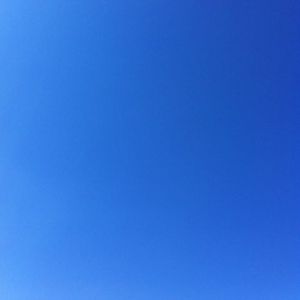